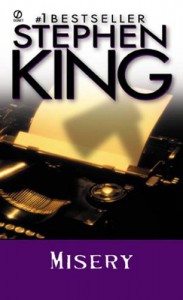 He discovered three things almost simultaneously, about ten days after having emerged from the dark cloud. The first was that Annie Wilkes had a great deal of Novril (she had, in fact, a great many drugs of all kinds). The second was that he was hooked on Novril. The third was that Annie Wilkes was dangerously crazy.
Wonderfully dark, creepy, bloody, and psychological read. Even though the story only has two characters, it never gets boring.